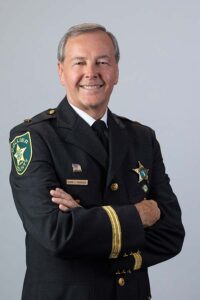 Honoring our cofounder and first president of the CCC, the award is presented annually to Collier County leaders who have made extraordinary contribution to the community.

Past winners were….
2017 – Carrie Kerskie, for her efforts in combatting identity theft
2018 – Judge Janeice Martin, for her work to advance mental health services
2019 – Nancy Lascheid, for her leadership in providing medical care to the underprivileged

Mr. Rambosk, our sheriff, is a New Jersey native who arrived in Florida in 1978 and has served as the City of Naples Chief of Police & Emergency Services and City Manager. He was elected Sheriff in 2008 after serving in leadership roles since 2003.

In addition to his public safety service he has served in both Board and Leadership positions for multiple community and civic organizations. Among his many civic achievement recognitions he’s been the recipient of the “Man of Distinction Award” from The Education Foundation, the Excellence in Leadership Award from the Greater Naples Chamber of Commerce and the NAACP Humanitarian Award.