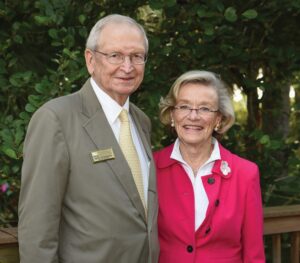 “It is our honor and pleasure to support this couple, recognizing how much they’ve contributed to Collier County and the Conservancy over the years,” Mr. Williams said. “It’s their integrity, dedication and unwavering commitment to what we do and what needs to be done here in the county.”

Each year, the Conservancy presents its prestigious Eagle Awards to individuals and organizations that provide outstanding leadership on environmental causes, shepherd philanthropic initiatives and participate in grassroots activism.

“Linda and I do what we do not for the recognition, but because of the work that needs to be done,” said Nick Penniman. “This award was truly special to us because it was given to us jointly, recognizing the work that we do together. There’s no other place in the region where you have as many environmental issues to address. We truly believe the Conservancy is the most effective organization in the country as their work is urgently important to the development of Southwest Florida. It’s a great honor and very satisfying for us to be involved.”

Nick Penniman retired in 1999 as publisher of the St. Louis Post-Dispatch. Currently on the Conservancy’s board of directors, he served as board chair from 1995-1997, and led the Saving Southwest Florida campaign to build the Conservancy campus for two years. For the Conservancy’s 50th anniversary in 2014, he published “Nature’s Steward: A History of the Conservancy of Southwest Florida.” He is a former member of both the Coastal Advisory Community and the Environmental Advisory Committee for Collier County. His second book, “A Toxic Inconvenience: Red Tide and Blue-Green Algae on Florida’s Coast,” was published late last year.

Linda Penniman served on the Naples City Council from 2014 -2019, championing the environment and serving on a special taskforce for The Conservancy, chair of the Collier County Waterkeeper and aiding the city of Naples Planning Advisory Board, Coastal Advisory Committee and other organizations.

To learn more about the Conservancy, visit www.conservancy.org. ¦