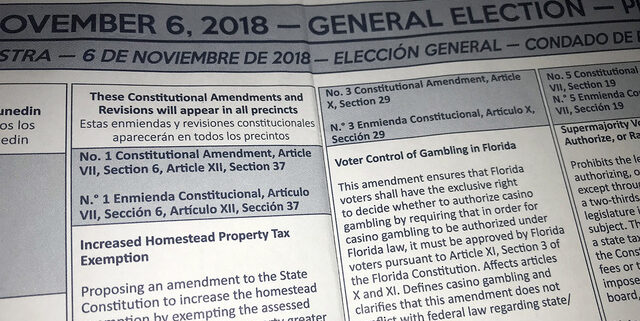 The smoke has finally cleared on the constitutional amendments.

After months of agonizing, the courts have whittled down the original 13. By one! That still leaves twelve amendments to bewilder the voters.

And it gets worse. Five of the remaining 12 are “bundled,” with two or more unrelated topics combined into a single amendment. For example, Amendment 6 couples expanded rights for crime victims with an increase in judges’ retirement age and a prohibition of state courts deferring to an administrative agency. The issues are confusing and you can’t separate them. Vote for one and you get all three.

Another bundled amendment, #10, establishes a Department of Domestic Security & Counterterrorism, changes the legislative session start date and prohibits counties from abolishing certain local offices. Again, it’s all or nothing. A yes vote approves them all.

Bundling is one problem, but simply understanding the ballot language is another. According to Ballotpedia, to read and comprehend an average ballot question requires a graduate-school level of education.

But understand or not, voters are being asked to make the call on things ranging from ex-felons’ voting rights to legislative hurdles for raising taxes to a dramatically new Florida gambling policy. A great deal is at stake. Tens of millions are being spent to influence the outcome.

To cut through the tangled mess and help clarify things, a consortium of civic groups is sponsoring a public forum on October 11, 6:00 – 7:30 p.m. at the North Naples Church. It’s free and no reservations are required.

Amendment 1 would provide an increase in the homestead exemption, an apparent no-brainer because most Floridians would benefit. But there is a downside. Lost tax revenues could cut services and reduce funding for government programs. A Collier County Tax Appraiser’s Office official will explain the amendment, Dr. Jim Carter, a management consultant and local Republican leader, will speak in favor of it and Amber Hughes, senior legislative advocate for the Florida League of Cities, will oppose it.

Amendment 3 would give voters, not the legislature, the right to approve casino gambling in Florida. That would be a game-changer, with moral and financial implications that could affect tourism and tax revenues. John Sowinski, chairman of “Voters in Charge,” will argue in favor of the amendment, and Isadore Havenick, vice president of Magic City Casino and the Bonita Springs dog track, will speak against it.

Amendment 13 would prohibit wagering on dog races, in effect killing greyhound racing in Florida. As expected, feelings run high both for and against. Animal rights people say greyhounds are exploited and mistreated. Opponents disagree, say the dogs are treated well and offered for adoption after their racing days are over. Kate McFall, state director of the U.S. Humane Society, will speak in favor of the amendment, and Christopher Grieb, a greyhound trainer representing the “Committee to Support Greyhounds,” will oppose it.

Discussions about the remaining amendments will be led by Patrick Neale, a prominent local attorney and state law expert.

So mark the date on your calendar, October 11, bring your questions and plan to join us. You’ll come away better informed about how to vote in November.